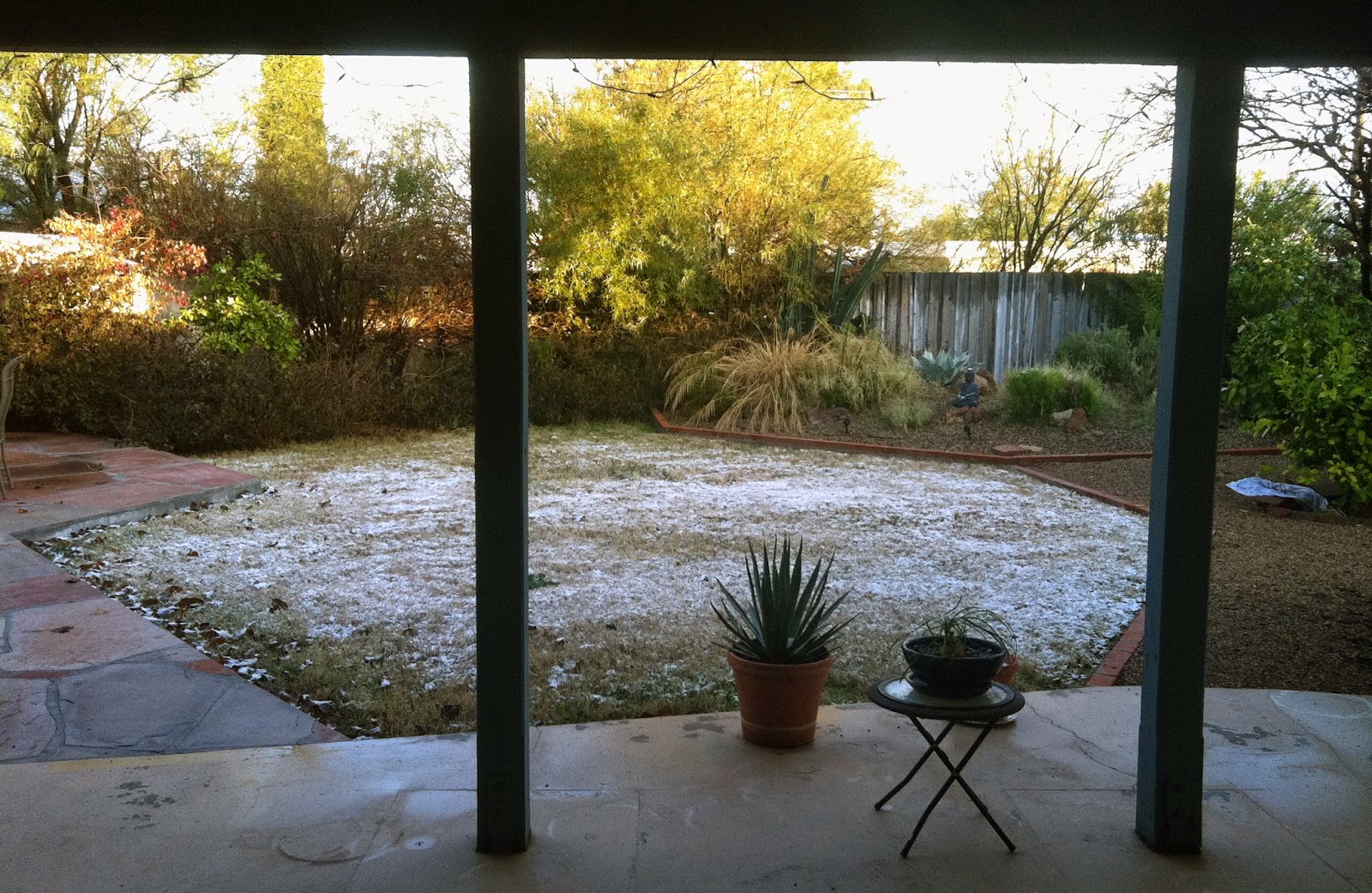 Snoooowwwww!  It fell for quite a long time last night, actually, and it stuck!  Wow, did that take me back…I hadn’t seen that much snow fall and stick since I lived in Idaho.  It was still around this morning, too!
This kind of thing is exciting to us Arizonans…I know it might not look like much, but it was enough for my husband and I to throw snowballs at each other and the dog, and that made us very happy. (Maybe not the dog, though…)
More snow pictures and New Year’s ramblings under the cut… 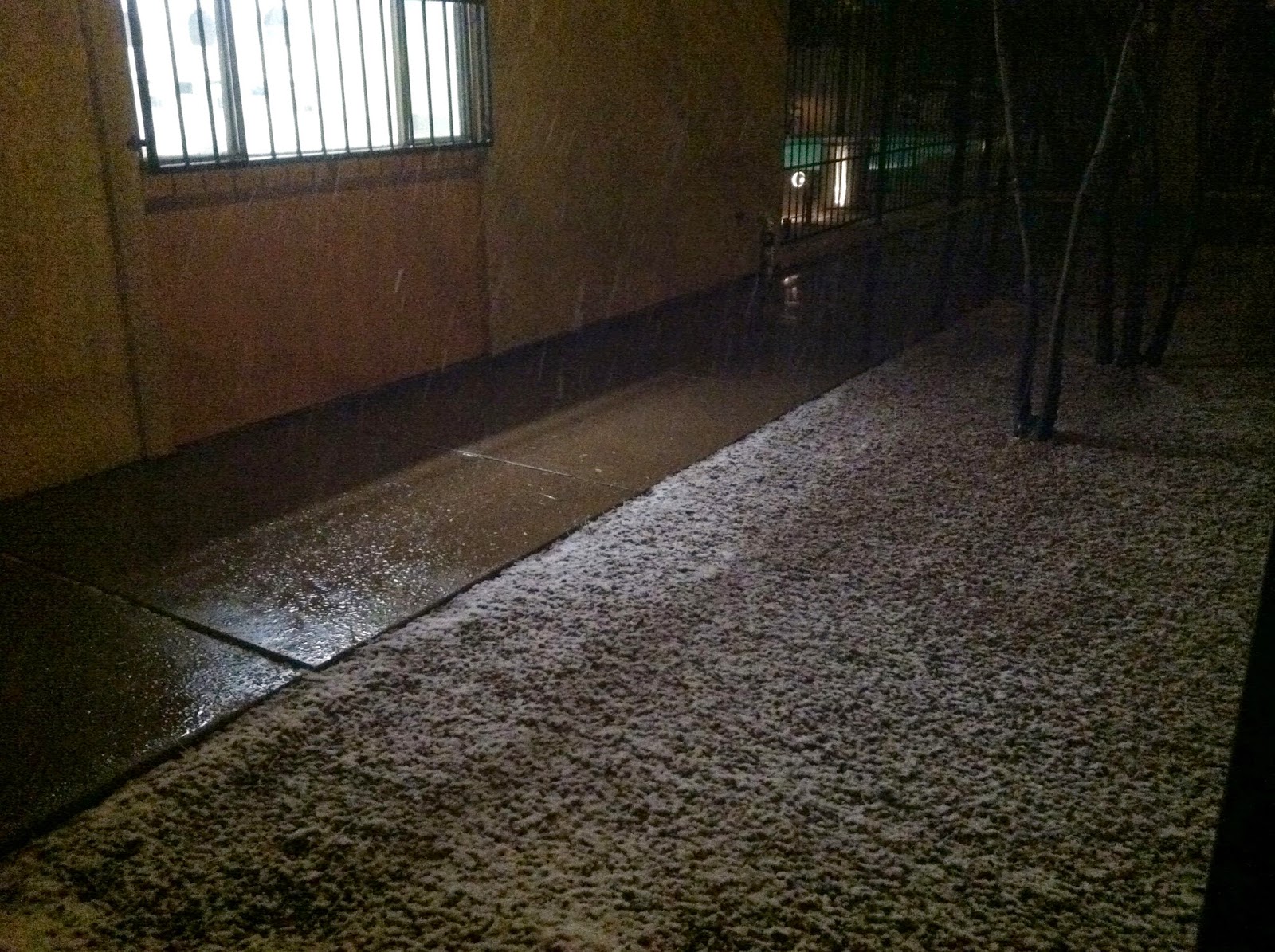 This was last night at a party we went to…seriously, this is a lot of snow for Tucson, stop laughing, you northerners. 😛 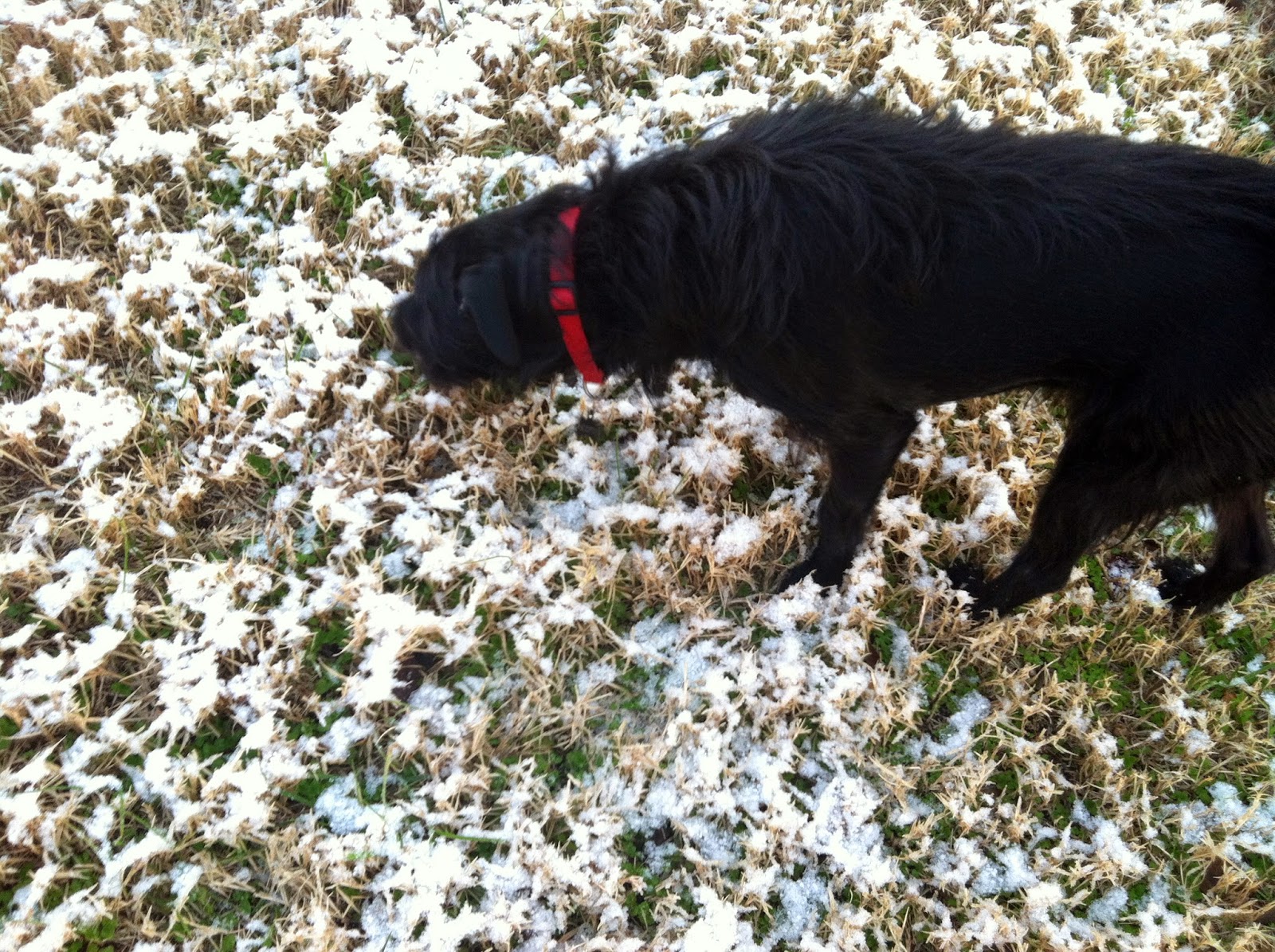 Scotty actually kinda liked it!  He was poking around being all like, “omg what is this stuff on the ground?” and running back and forth, poking at his gator chew toy he’d left on the lawn and being very confused as to why it was crunchy and cold.  Then he started eating snow-covered grass.  Weirdo…
Now…it is a new year.  I mentioned in here before that I don’t tend to make resolutions until Chinese New Year, because it gives me some extra time to think about them, and to get a feel for the year and see what might actually be doable.
I thought of this last night, though: one of my words for 2015 will be de-escalate.  What does that mean?  It means that whenever I feel my stress getting out of control, or whenever something bad happens that could totally tank my mood, instead of letting it do that, I’m going to try to consciously de-escalate the situation in my brain.
For instance, last night I parked my car badly and damaged my rearview mirror (and I wasn’t even drunk at all!), and I was all set to be mad at myself and irritated that I would have to go get it fixed, and it would cost money, and just go into a big downward stress spiral.  But I took a breath and de-escalated.  It was just an accident, and if all else fails, I could temporarily duct-tape it on, no worries! (probably won’t, though, because it would look terrible…I’ll probably just suck it up and go get it repaired)
Upset that I didn’t get into an art show that I thought was a sure thing (which actually did happen a couple weeks ago)?  De-escalate.  It doesn’t mean that now I suck, it might just mean that they aren’t really accepting ANY painters (which turned out to be the case), and to find some other shows.
Feeling angry at someone, either in a work or personal context, for a perceived insult or whatever other thing?  De-escalate.  Prove the insult wrong by being the better person.
Annoyed at some everyday thing like bad drivers or overcooking dinner?  De-escalate.  Take a breath and let it go.
Starting to feel stressed when there’s too much on my plate?  De-escalate.  Just do one or two productive things a day to make a dent in the stressful situation (like unpacking boxes, right now…oy), but then take some time to relax at some point in the day.
Who knows if this will work or if I’ll keep it up all year, but I’ll give it a try.  De-escalate!  Might have to make myself a word art that says that and keep it at my desk as a reminder…who’s with me?