Reasons why you should always check out the gift shop…

I found some inspiration from an odd source while we were on our day trip on Saturday.  Was it the desert landscapes?  The mountains?  Nope…it was from a gift shop.

It was very inspiring, though!  And it’s also odd to me because it’s not my usual style.  Let me explain…

You know those statuettes that you see in Hallmark and similar places, where it’s a faceless woman in a white dress, either embracing children, embracing an equally faceless male figure in white, or dancing and holding flowers?  And it’s meant to look like carved wood but it’s really some kind of polyresin?  Like this:

(I swear, it took me so many different Google search strings to find out where these came from.  One can’t just search “woman figurine white dress kinda corny” and come up with a correct result, you know.)
So yeah, these are everywhere, and they’re sort of twee and cloying…but I was looking at them in the Fort Huachuca Museum gift shop, and there was something kinda appealing about them.  The simple style, the way the figurines’ facelessness makes them easy to project your own image onto (if you’re white/light-skinned, anyway…the “darker skin” options are still pretty darn light), and the rustic look is, I admit, sort of pretty too.  They’re the kind of things you can give to newlyweds or new mothers and they can be sweet and heartfelt, and tasteful enough that the recipients can actually display them (unlike many other things I see in gift shops, these are actually universal enough to go with many different decor styles). 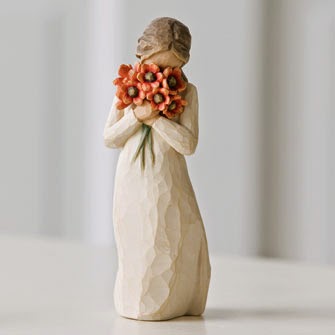 See?  Sorta sweet, actually!
Often, when I find something that I like, I think, “what aspects of this could I use in my work?” rather than taking the whole idea and running with it.  So although I won’t be painting any white-dressed women with no faces cradling babies, I did have this thought while browsing the gift shop: “hmm…maybe I should do some paintings of mothers with children, or couples with babies, and things like that.  But in sort of a simple-yet-appealing style…just a different simple-yet-appealing style than these figures.”
And on Labor Day, I started this!
Very (very!) unfinished right now, but you get the idea.  More specific-looking people than the Willow Tree figurines, and will be a very different color palette (more tropical/Central American, like some of my other paintings), but kinda similar idea.  I figure this would work well as greeting cards and prints, too.
I have sketches for a couple other possible paintings in the same vein, including a dad-son one (Willow Tree doesn’t seem to feature many dads).  It’ll be something a little different for me…and if it works out well I’ll paint some more!