Gettin’ pinky with it… 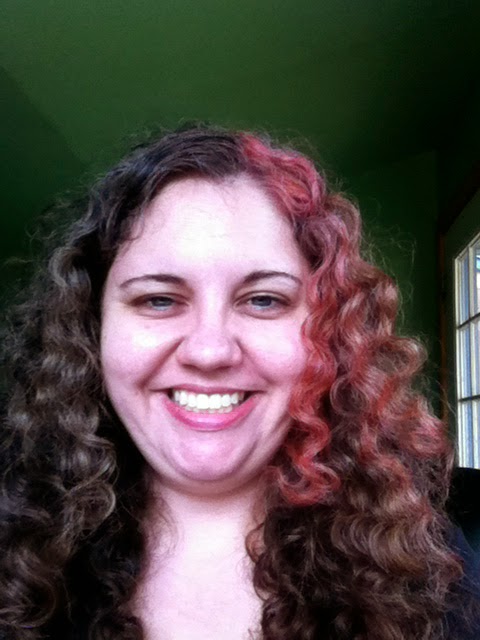 This is the first time I’ve done this, too!  Yes, I managed to go to four years of art school (and a few years of nontraditional jobs that were pretty lenient about, er, alternative personal appearances), and I had never dyed my hair an unknown-to-nature color.  Why now?  And how now?  Well…

Well, for one thing, this weekend was the last weekend I appeared in Shakespeare’s Twelfth Night (which I also directed).  I figured pink hair would be inappropriate for Shakespeare, even though I was playing Feste the fool.

Since I don’t have any theatre commitments (at least, not acting) for a while, I thought this would be a good time…and also, there is now such a thing as color-depositing conditioner in fantasy colors, from Overtone.
I may be slightly biased because Overtone was founded by my wedding photographer and generally awesome gal, Liora…but it really is a terrific product.  They have six colors, varying levels of color intensity (from pastel to traffic-stopping), and a daily and weekly conditioners.  I got the daily in Vibrant Pink, and it worked really well.
I bleached the highlight myself at home using a L’Oreal highlighting kit…now, this I might do at a salon next time, just to get a more even result.  But it came out okay, and anyway, I do most of my hair stuff myself (coloring and even cutting sometimes!), so that’s something I was used to.
And actually, I kinda like the variation in the pink shades throughout my hair…I like that it’s not just one big chunk of color, it’s more subtle and almost, dare I say, more natural?  If pink hair could naturally grow out of my head, it would probably look like this, is what I mean.
I used Overtone to dye my hair, as well as to refresh it throughout the week.  It worked great!  Plus, it actually smells amazing.  This is important to me.  Many hair dyes are purely utilitarian and smell chemical-ish and weird, but this smelled like a garden of fresh herbs, seriously.  I bet your Manic Panic can’t do THAT.
If you’ve been wanting to dye your hair a funky color, DO IT.  The best time is now, as long as it doesn’t cause problems with your work situation.  It doesn’t matter if you’re “too old” for pink or blue hair, or if you’re a parent, or even grandparent, who the heck cares?  You’re never too old to have fun with your personal style.  Mrs. Slocombe thinks so too:
DO IT.