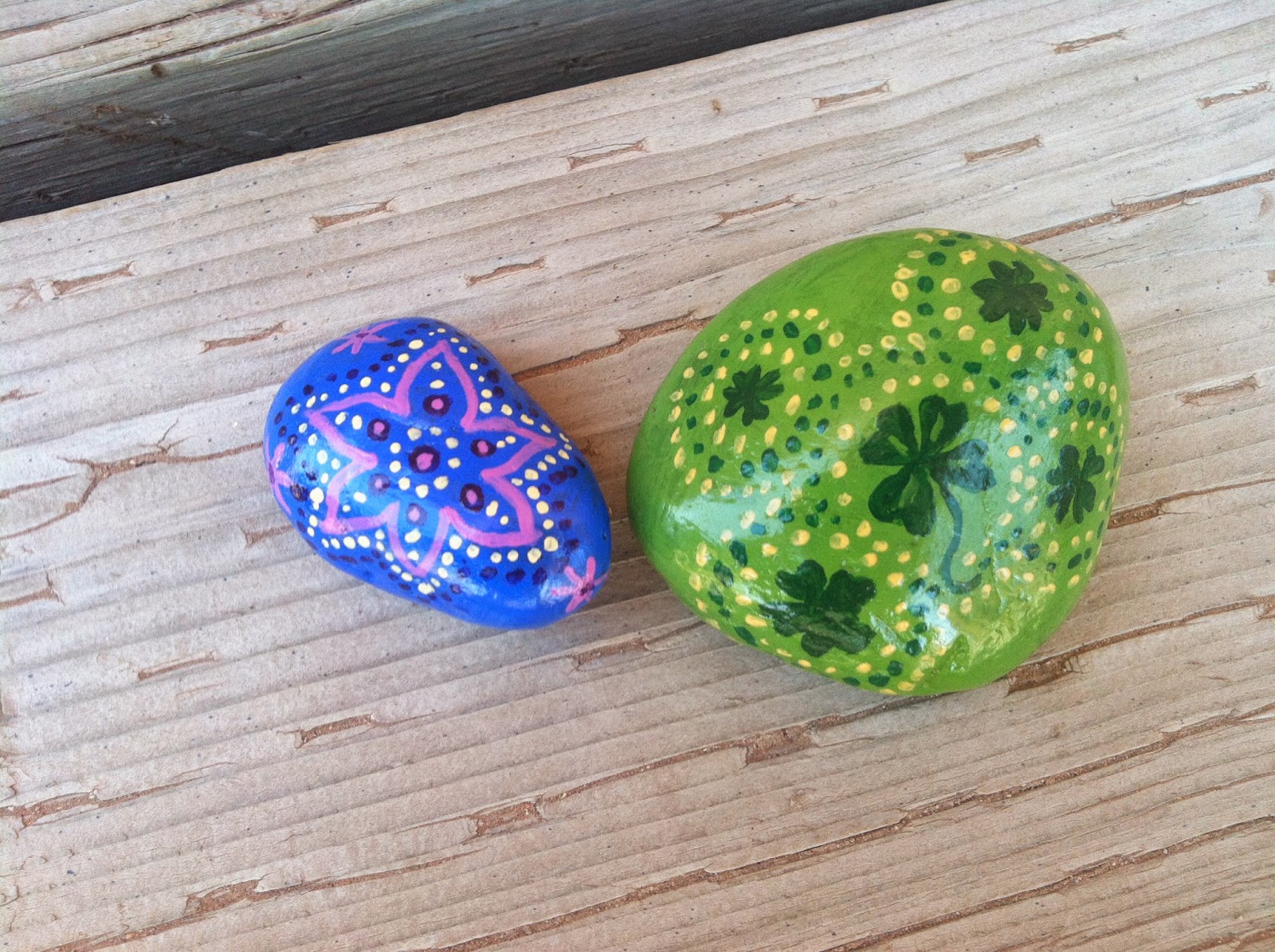 Actually, don’t bother intervening, stone painting is too fun!  So I probably won’t stop doing it. :p What’s so fun about painting a bunch of river rocks, you ask?  Well… 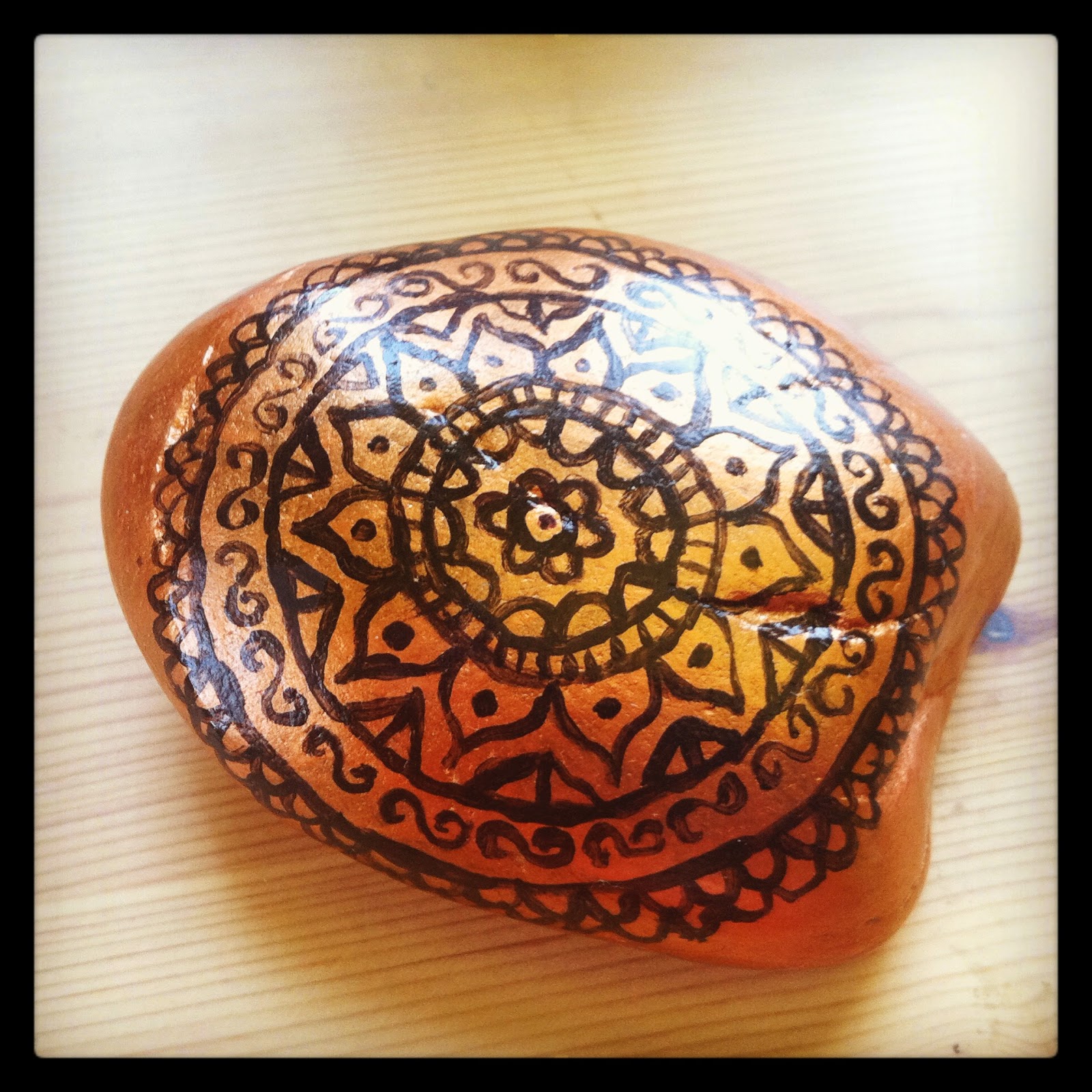 It’s a different challenge than painting on regular canvas or paper, for one thing.  It’s a much smaller space you’re painting on…although I have been doing some larger ones like the one above (it’s about 3 inches wide…most of the river rocks in the big bag I picked up are only an inch, or inch and a half).  You really have to simplify when you’re painting these…even though I use a tiny “dot-making” brush, it can still be hard to paint something so small.
But you can also work with the organic shape of the stone, and see what the shape suggests to be painted as…which is how I sometimes end up doing bird rocks:

One looked like a turtle, so I painted it as a turtle, another looked like a seashell so I went off of that in my design…and the stone shapes aren’t perfect, they have striations and they’re odd shapes, but I like that about them.

It also doesn’t take too much time, since it’s pretty small.  And since it’s a fairly quick process for me (at least compared to a regular painting), I’ve been feeling more free to take risks and fail.  If I don’t like a stone, no big deal, I can just grab another one and try again! 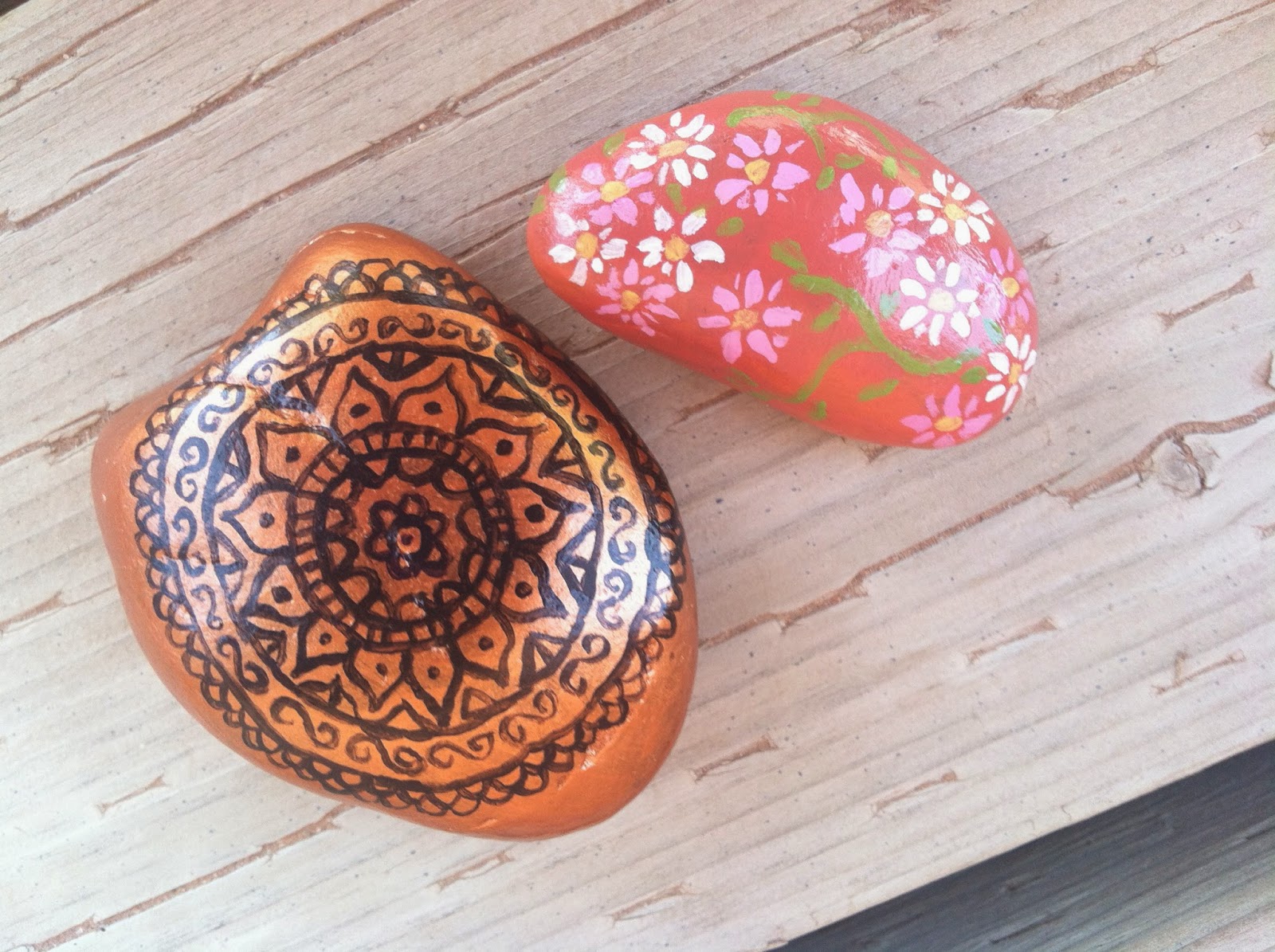 I made half a dozen today…they’re not these ones pictured, the ones I painted today haven’t been glazed/sealed yet like these have.  The sealing is to make them more durable, since I plan on selling some at craft fairs (possibly on Etsy? Maybe…) and I don’t want them to fade or get chipped.

I’ve had one stone in my garden for a few months now, and it’s held up really well!  It got rained on, got tons of sun, and even had an overzealous dog pick it up and try to get me to play fetch with it. (This is Scotty’s reaction to many inanimate objects.) Really, the only damage it sustained was a small scratch on the back from said overzealous dog’s tooth.  I mean, I probably wouldn’t put these where there would be tons of water (in a tree well, or anywhere they would be submerged for a significant amount of time), but other than that, they’re pretty durable.

You can put them in your gardens, flowerpots, or on your desk as paperweights, or…some have been made into magnets:
The magnets were annoying to quality-test, though.  The first magnets I bought were pretty small and kinda weak…stones are heavy, and they didn’t end up sticking sufficiently to my fridge or whiteboard.  So I put on more heavy-duty magnets with a really strong glue, and that worked better.  These suckers will stick to anything.  In fact, I couldn’t put them any closer together to take this photo, or they would snap to each other.  Can’t put them too close to your computer, either.  But they DO look smashing on your fridge, helping you hold up coupons!
I’ll probably continue to post new stones as I make them, and I’ll keep everyone posted on whenever I get an Etsy going for these.  In the meantime…what else should I paint on stones?  Other animals?  Words?  Portraits of George Takei? (Actually, that would be kind of awesome…)