This week, I set up my craft fair/arts festival trial run booth, so as promised, here’s the story…

On Monday, while I was out doing errands, I went to Target and got the last piece of the puzzle: grid shelves.  See, for a craft fair booth, if you just have all your stuff on one table, with no levels, it’s kinda boring-looking, right?  People will pass right by because there’s no visual interest.  And I didn’t want to get the 5- or 6-foot tall modular gallery walls that some people have, because they wouldn’t fit in my car, so instead I decided to put the walls ON my table.

And I got a good deal on the grid shelves too, since they were on sale for 25% off.  Woohoo! 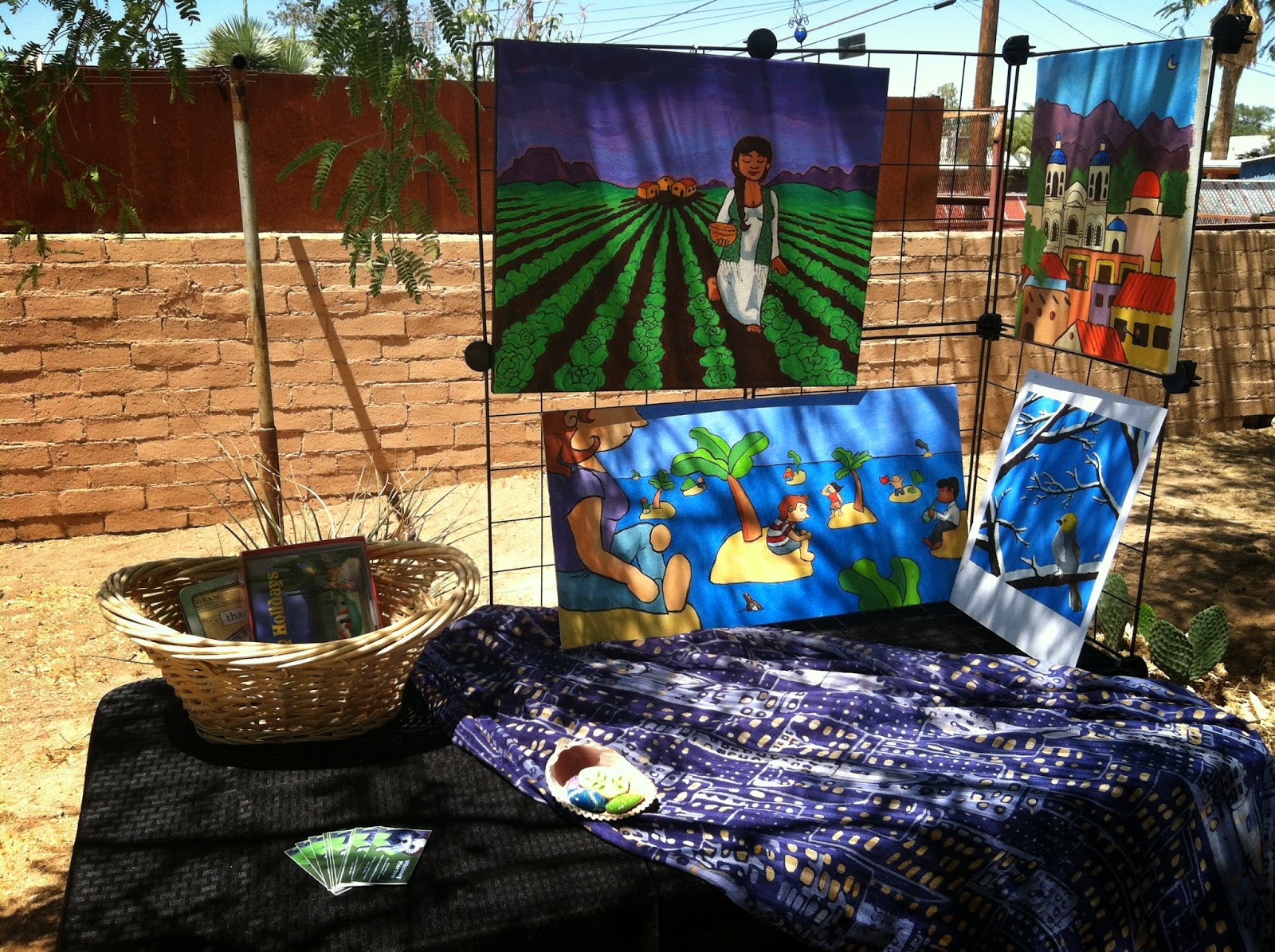 When I got home, it was around 10 AM, it obviously wasn’t going to rain, and there wasn’t much wind.  Since I was setting up my trial booth in the backyard, I figured this was as close to optimal conditions as I could get (it probably won’t be this nice of weather during the actual craft fair!), so I said, “Let’s do this.” (I said it to my dogs.  They just looked confused.)

I set up two tables (one folding banquet table, and one smaller wood table – that sucker was heavy) in the shade of a tree in the yard, put on some cheap black tablecloths, assembled the grid units and stuck those on top of the tables, one on each, in the corners.  I put my brand new print rack from Framing Supplies Shop (highly recommended!  I don’t know how they keep their prices so low while still supplying good products, it’s a miracle…they didn’t even pay me to say that, either), and filled that with some prints, and it was starting to look like a real booth! 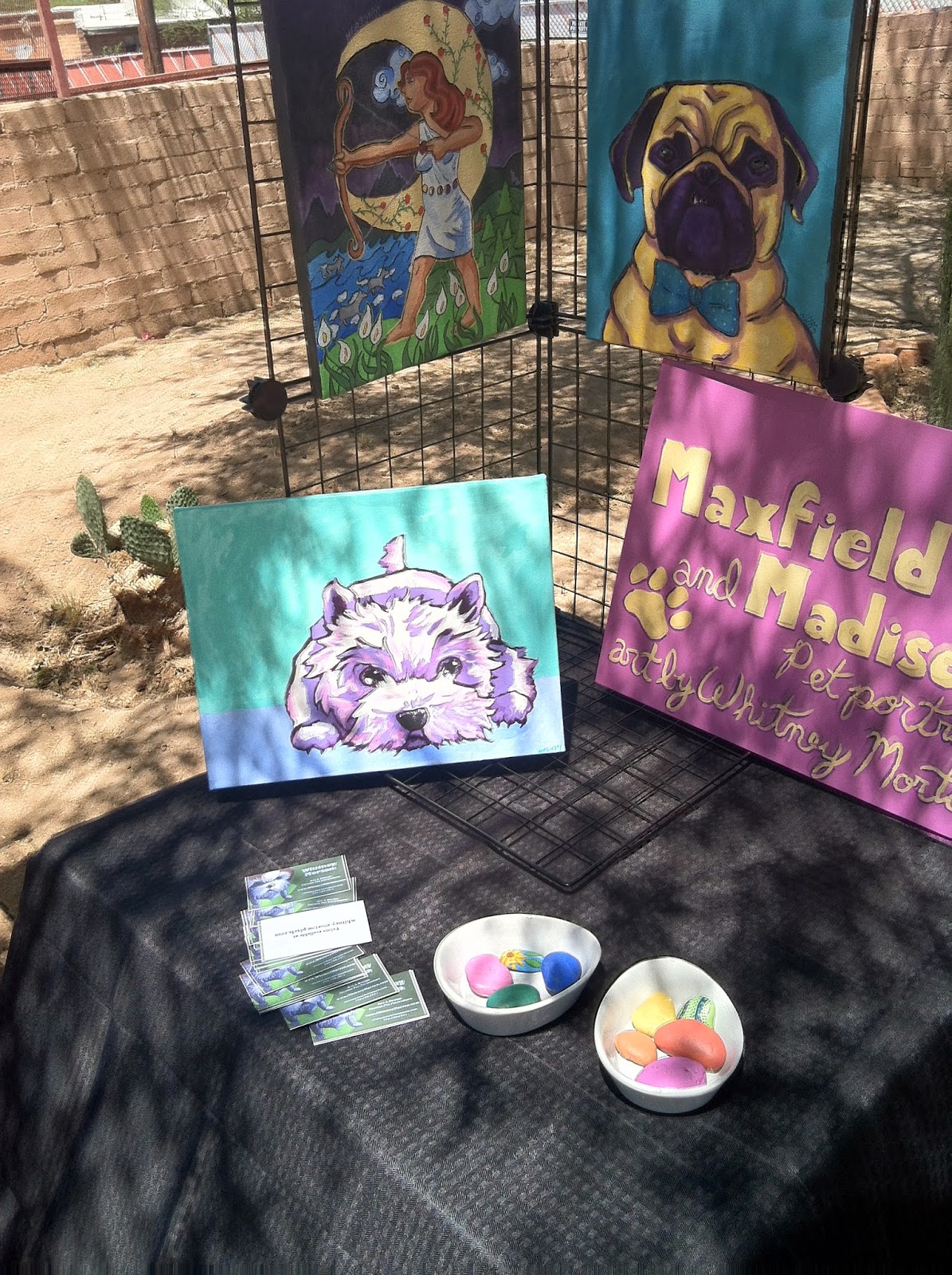 So that’s the basic structure of the booth done, and now…time to pretty it up!  I put on a more colorful table runner (which was really a scarf), picked out some paintings to hang on the grids, hung them up, then continually had to hang them back up after they blew off, because the wind had picked up by then…bummer. (I blame El Niño.  That’s a thing we can do this year, right?)
I put my painted stones into the dishes I got at Michael’s last week, as well as into a pretty shell dish I had lying around, and brought out a small basket (left over from the wedding – yay, recycling!) and filled that with packs of greeting cards (need to get some more printed…I only had two packs).  And then I took some pictures, and then took the whole thing down again.  So it was set-up and take-down within an hour and a half, and it’ll probably be quicker at an actual show because I will have replaced the heavy wood table with another lightweight folding table.  Not too bad, huh? 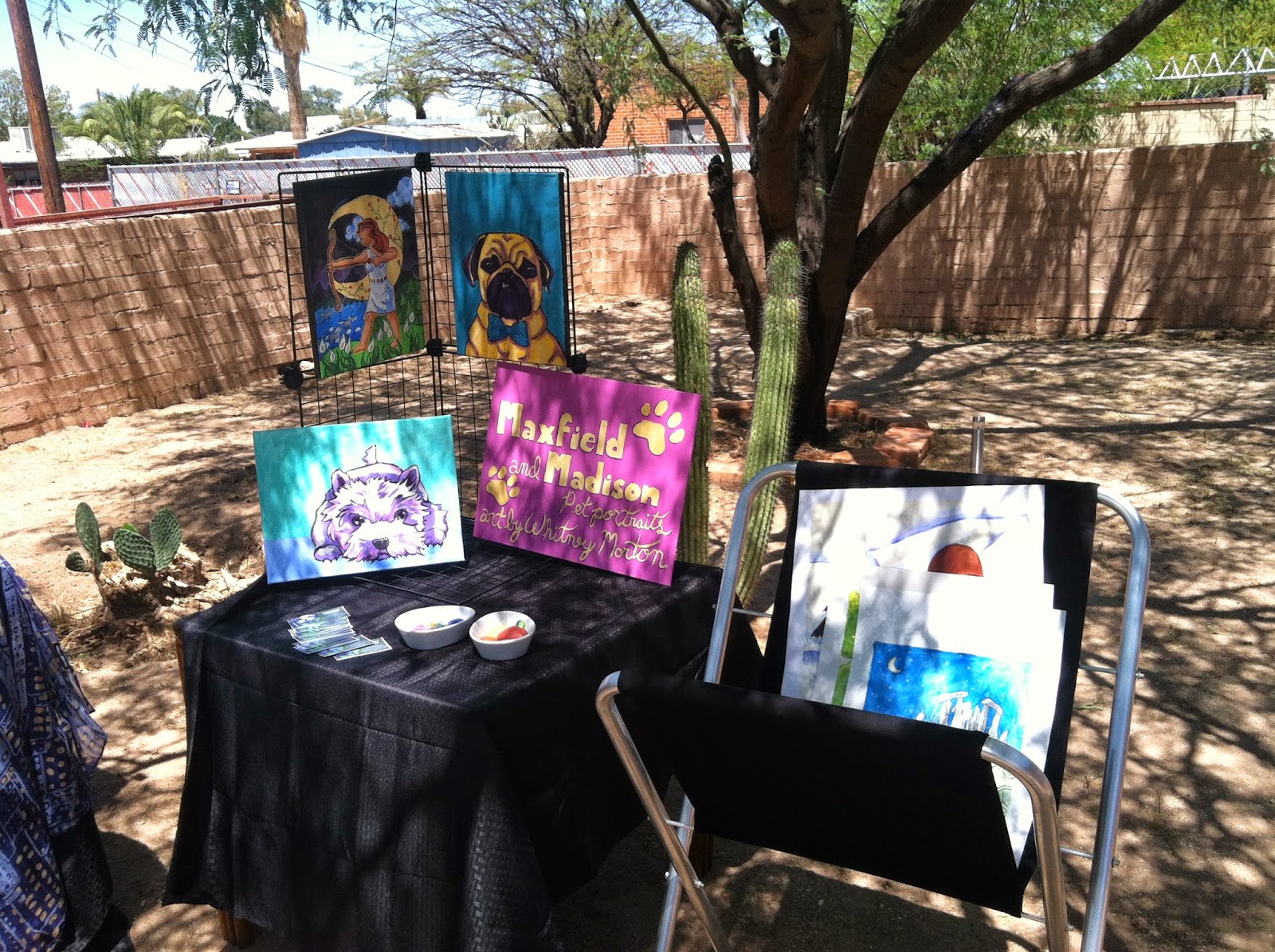 I think the table came out pretty well, although there will probably be things I do differently for the show…I might get another “table runner” for the second table, and hopefully the tables will look less bare because there will be more stones, more greeting cards, and just MORE for people to choose from.  Maybe a second print rack, too?  And I definitely think I want more grid space, and since I bought a kit that has 24 or so panels in it, luckily I have that option.  Maybe either extend the grid walls up by one more panel so that they’ll be 42 inches taller than the table, instead of 28…or just have them run along the back edge of the table to create more of an enclosure, and allow space for bigger paintings.  I’d put the sign up higher too.  Ah, well…hopefully I’ll have lots of chances to try out different things at different craft shows, and the setup will evolve over time.