So although my first arts and crafts festival (on my own as an artist, not working someone else’s booth) is probably four months away, as you may have noticed from this blog, I’m going a little crazy with planning.

I realized that, prior to even being accepted in a show, I need to do a test run of my booth setup, not just so I know how to do it and what it will look like, but because many shows ask for a photo of your booth as part of your application.  And I don’t want to look like some noob and not submit one…but although I have helped design and set up booths for other people, I don’t want to submit that, because that’s not what my booth will look like.

What this means…is that I’ve been looking for DISPLAY FIXTURES!

Now, we have some limitations here.  Price is one of them – I don’t want to spend tons of money just to make a mock-up booth for a show that I may not get into (although I’ll be able to use it for some show, sometime).  The other big one is space: I took a measuring tape to my car, and I discovered that I can only really haul things in there that are shorter than 4.5 feet.

I found four-foot grid wall at a local place that sells store fixtures, but, well…hanging art that much shorter than people’s eye level won’t look that impressive.  Then I thought I would have grid panels on top of a table, but if I put a four-foot grid on top of a standard table, that makes it seven feet tall, and kinda top-heavy, not the most stable thing to hang my art on.  And if I have framed pieces, I really don’t want it to fall down in a stiff breeze.
Currently, my plan is to get some smaller grid shelves, you know, the kind with different cubes that you can arrange in various ways that everyone had in their dorms?
So I’d make those into little walls, and have those on my table.  Or failing this, some kind of pegboard or trellis situation – this will require a little more finagling, possibly even the use of power tools, but it could happen!  Or buying some larger gridwall and cutting it down with bolt cutters – the guy at the fixtures store said that was a possibility.
Another thing I will need before a craft show?  Conveyance devices!  As I mentioned in my “how to do a craft fair” post, it’s better to have something on wheels in order to get your stuff from your car to where your booth will be.  Either a dolly, some kind of storage bin on wheels…or something like this! 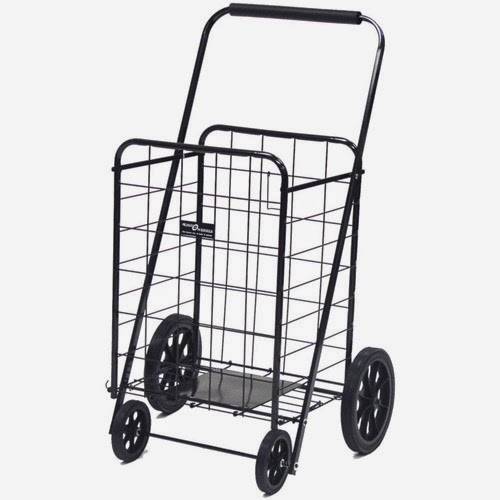 If you live in a big city where people rely on public transportation, you’re more likely to have seen one of these…it’s a personal shopping cart!  You load your grocery bags (or laundry, or whatever) into this, and pull or push it along between the store and the bus stop, and then the bus stop and your home.  I’ll probably need a large-ish one, because I’ll be bringing some canvases that are up to 18 inches wide, 24 inches or more long, plus business cards, tablecloths, a receipt book, maybe a sketchbook in case I get bored, all those things.
I looked for one of those at Walmart today, and I didn’t find it, but I was tempted to buy this instead: 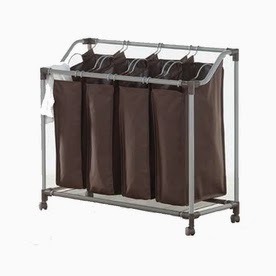 It’s a hamper on wheels, but wouldn’t it be perfect for carrying canvases in those compartments?  And then you can keep everything separate and organized!  I might just do this, actually…
And if this sounds like a lot of stuff, especially since I’m not even sure if I’ll get into this art show, well…yeah, it is.  But it won’t go to waste, either: I just found out that Monterey Court, which I had mentioned in this post about my dream studio space (I’m still lusting over some of their studios there!), has what is basically an art flea market.  You can go any day if they have space for you, set up a little pop-up shop, and sell whatever you like!  This sounds like a fabulous deal to me, and would be a good way to get my feet wet at art fairs.
Okay, this post has gone on long enough, so this will probably end up having to be a multi-part series about how I’m getting ready for upcoming shows…in the next part I’ll go over fun stuff, like choosing a color scheme for my booth, decorations, and signs (and why I love Michael’s post-Easter sales).  So stay tuned for that.