We had a good weekend, all the denizens of the Art Shack…it was both relaxing and productive, which is the kind of thing I like.  Productivity is good, but it’s also good to sit down and have a beer when you’re finished being productive, am I right?

We had our “yay, now we’re married” party this weekend, which was basically just inviting all our friends over for a big party, since we had a small wedding and we couldn’t invite everyone to that.  So I got to bust out our wedding flowers again… 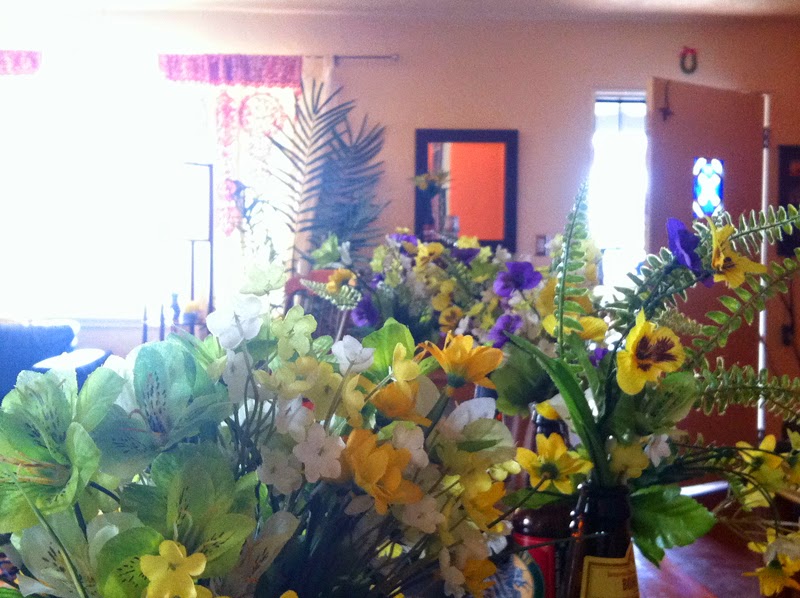 And we did other stuff, too.

We did lots of cleaning beforehand, lots of Costco-ing, some food prep (slow cooker pulled pork, oh yeah) (I substituted bourbon for vinegar in that recipe, it turned out really well).  It was pretty much perfect weather to just sit out on the porch and hang out, so we did that for much of the party.

Scotty and Madison loooove parties, not just because they get lots of attention and fawning-over from different people, but also because they get tons of “oops food.”  Any time anyone dropped anything (carrots, chips, even cake on one occasion), these dogs were ON IT.

Then on Sunday morning, we went out to breakfast and then sat around on our porch some more.  Still perfect porch weather.  It won’t be like that for much longer, so now is the time to take advantage of it.

The productivity came in that afternoon…I finished a painting (which I’ll post later this week, because I want to ramble about it a bit, so it needs its own post), and I did some “first aid” on another painting.  It was one I did…shoot, almost seven years ago (right after I graduated from college…wow, now I feel old), and it had gotten a little scratched up in places, plus the canvas was kinda loose.  That’s what happens when you transport a painting through four different moves, two of them cross-country, I guess…

So I touched up the places that had gotten scratched, and I painted some extra gesso on the back of the canvas, which is a trick I learned a while ago to tighten a canvas up, when you don’t want to take it off and re-stretch it.  And it worked! (The first time I tried that, I was thinking, “there’s no way this will work,” but it totally did.) See, these are the kinds of weird things artists do, when we’re not painting…we do art first aid. 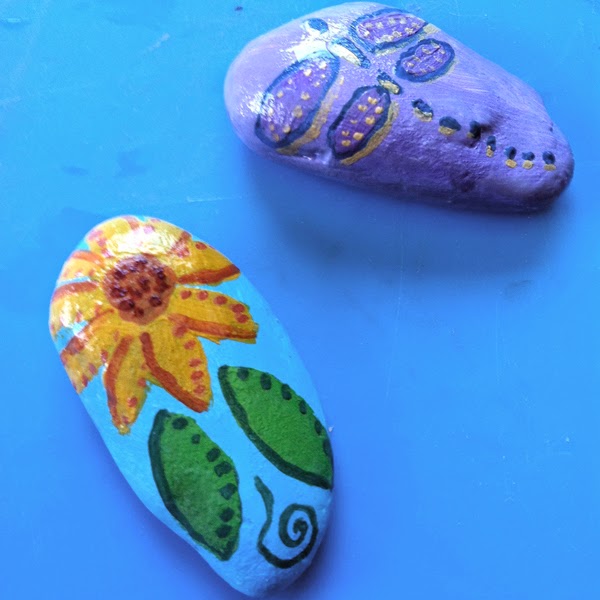 I also painted some more rocks!  Yes, I know, I have an addiction…but I’m not going to stop. 😛 I had wanted to try a sunflower and a dragonfly, and although I think I can do better (I always think I can do better, though), I kinda like these.  Now I have about a dozen painted stones, some of them (like these) waiting to be turned into magnets.  I think I need to re-start an Etsy store, or maybe even a Square Marketplace shop, and put these on there…hmm.
So that’s the kind of exciting thing I’ve been up to.  What’s everyone else doing on this fine Tax Day?  What are y’all going to use your refunds on? (Psst…use some on an art print.)